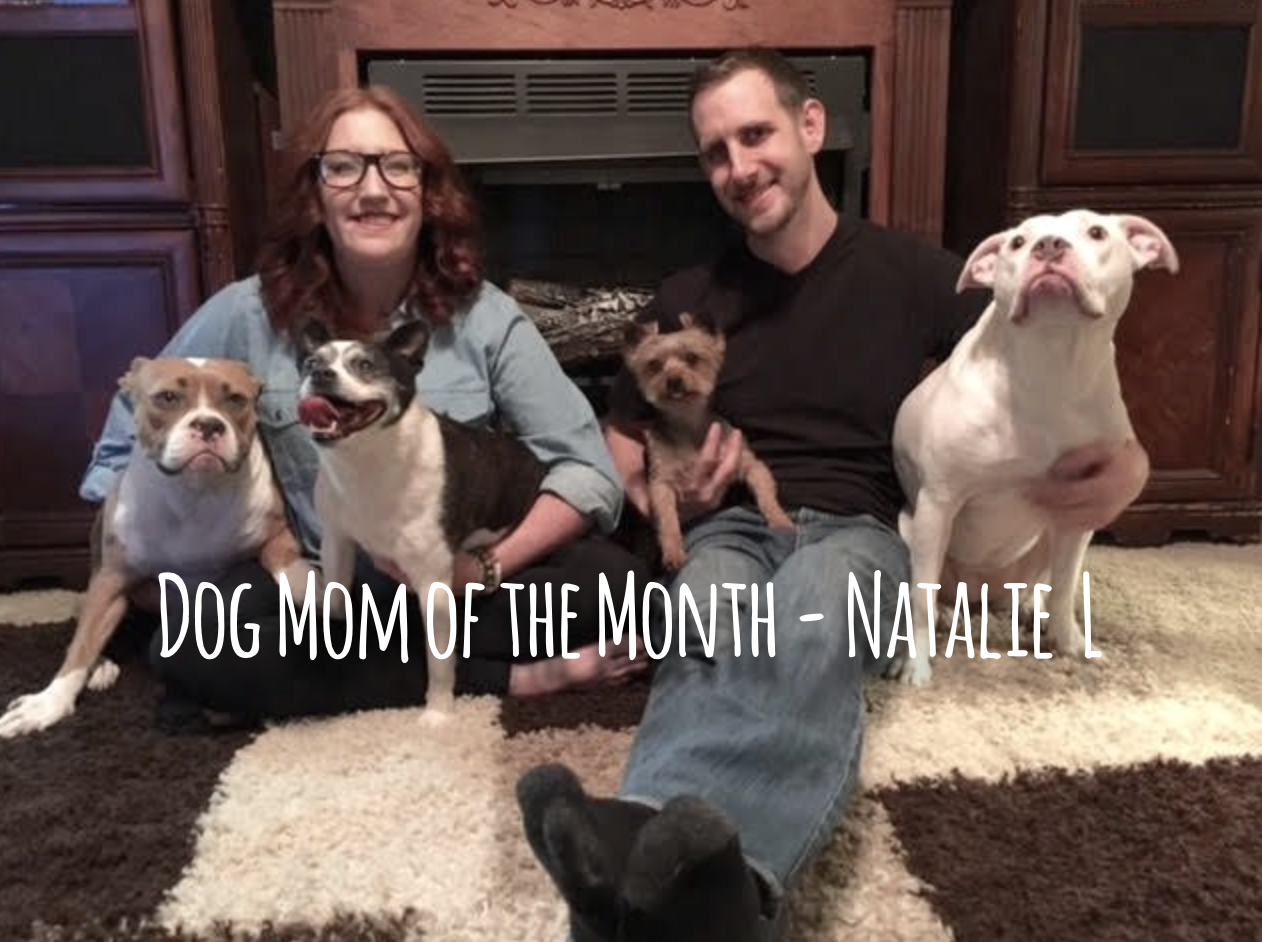 The Dog Mom of the Month feature celebrates extraordinary dog moms who share their stories about life, love, and happiness while living with and caring for their canine kids. Share your story to possibly be a featured dog mom by emailing alicia@theholisticpetwellness.co.

Natalie Lachappell lives in Battle Creek, MI with her husband Jeff and their four rescued dogs Scrappy, Willy, Lola, and Jazzy. She’s been a dog mom for over ten years and has loved every moment of it. Natalie adopted her dogs from all over the US, and from as far away as Germany!

Scrappy, a Boston Terrier mix, was adopted at six-months-old from a shelter in Iowa. Scrappy is now 11-years-old and doing great in his senior years. Next came Willy the Yorkie, all the way from Germany. His family “couldn’t deal with him” anymore because they were having a baby and he was “too hyper and peed too much”. Willy was two-years-old at the time and unneutered. He very much enjoyed marking his territory during this stage in his life. Natalie pleaded with Willy’s family not to sell him to another German breeder. The family agreed, and Willy came back to the US with Natalie. After Willy had been neutered, his territory marking in the house was no longer an issue. Willy is also 11-years-old now. Fun fact: Willy’s full registered name is Willy vom Borbachtal.

Five years later an emaciated, dirty stray “pit bull” type dog was running the streets of their neighboring city in Michigan. Animal Control picked up the young white female dog, and a vet tech transferred the dog out of animal control so she wouldn’t be euthanized. A picture of the dog was sent to Natalie, and she knew this was her dog. She immediately fell in love and adopted the dog, now named Lola. Lola is over four-years-old and completely loves her canine siblings.

Before Jazzy officially became the fourth adopted Lachappell dog, she was adopted from a California shelter with her kennel mate where they lived outside on cement for three years. Both dogs were eventually returned to the shelter to once again, look for forever homes. It was so difficult for the shelter to adopt out two dogs together, they ultimately had to adopt them out separately to give them a fair chance at a home. Jazzy’s kennel mate was adopted almost immediately after they were allowed to be adopted separately. Jazzy was devastated and depressed. Eventually, Jazzy was adopted and returned again.

A Purposeful Rescue in California stepped up to take Jazzy into their program after she was at risk of being euthanized. Natalie saw Jazzy’s picture and information on Facebook, and fell head over heels in love with her exclaiming, “I will hop on the next plane to California and adopt her!” After some back and forth for a few months trying to figure out logistics and another possible adopter falling through, Jazzy’s foster Stephanie was talking to advocate Rebecca Corry about Natalie’s interest in Jazzy. Knowing how hard it is to adopt out of state, Rebecca’s non-profit, Stand Up For Pits Foundation offered to pay for all of Jazzy’s travel from California to Michigan. Stephanie and her mom packed Jazzy up in the car and drove her all the way from California to Michigan! Jazzy had finally found her perfect forever home.

When Natalie isn’t taking care of her canine kids, she spends time volunteering at her local animal shelter. Natalie used to work at a dog daycare, but has since been focusing on her volunteer work, and taking care of her family. She loves being a stay at home dog mom and has been recently trying her hand at making DIY sweaters and hoodies for her kids. She spoils her pups with puppachinos from Starbucks, home cooked steak, ice cream cones, and the occasional McDonald’s chicken nuggets.

Natalie and her family are forever grateful for the work of the Stand Up for Pits Foundation, be sure to check out their life-saving work.